David Curry of Open Doors USA says Brownback already has a good track record when it comes to fighting persecution.

“He spoke out on the genocide in Sudan’s Darfur region and he stood behind and was one of the first key sponsors for the International Religious Freedom Act,” says Curry. “These are the kinds of things he has in his background that I think make him uniquely qualified for this role. He has the potential to be a strong voice on behalf of Christians and other religious minorities.” 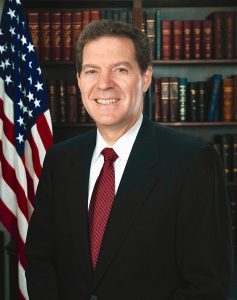 Sam Brownback, the nominee for the position of Ambassador-at-Large for International Religious Freedom (Photo courtesy of Wikimedia Commons)

It’s an office Curry will be especially glad to see filled. “The Ambassador-at-Large talks with our partners around the world, countries that we’re working with, countries we do trade with, and countries we’re looking to improve relationships with about the most basic human right to belief,” Curry says.

If selected, the nominee will plead on behalf of men and women imprisoned for their faith, fight against persecution in its many forms, and bring light to religious intolerance at home and abroad.

“This person is our liaison as Americans to these foreign countries to talk about these very critical, important issues because these are the things that are at the center of many of the very major issues we face today.”

Brownback will need a strong voice if he’s chosen for the position. Religious intolerance plays a part in more than one major crisis across the globe. Curry says countries like North Korea are forcing religion on the populace to control them, ISIS’ attempts at genocide are fueled by a twisted religious agenda, refugees have been forced from their homes by religious persecution and abuse, Northern Nigeria is still facing the effects of the propaganda of Boko Haram, and the U.S. is considering trade agreements with countries like Saudi Arabia and India that have ongoing persecution problems.

All in all, “We’re hoping for swift confirmation by the Senate because Governor Brownback has a strong track record in this way, he spoke out in the Senate on this subject, and we think this is a very strong nomination.”

But for those of us who aren’t part of the Senate, what’s left to do? First of all, Curry encourages believers to support this process as the Ambassador-at-Large is chosen. “As Christians, we have nothing to fear from the open market of ideas,” Curry says. “We want to be free to talk about our faith? They should be free to talk about their faith. That’s what this is all about.

”Christians around the world who have been unheard will now have a voice at the highest level in the United States.”

Curry also asks U.S. citizens to write to their local senators on behalf of Brownback so this position can be filled quickly. He believes the nomination makes sense and says the sooner an Ambassador-at-Large is chosen, the better.

At the end of the day, it’s not about the politics. It’s about how God could use Brownback or any other nominee for His purposes and glory.

“I’m sure it’s helpful that Brownback has been successful in his various roles, but what we’re really looking for is somebody who can advocate for religious freedom regardless of what people’s faith is and even if they have a faith at all,” Curry says. “People need to have a right to freedom of conscience, and the people that the United States does business with, the countries around the world, we need to all hold up this right as central to human dignity.”

Find out more about the kinds of persecution Brownback would have to address.