On Eagles’ Wings team needs the support of prayer warriors

North America (MNN) — Earlier this summer, we shared about the Warrior Leadership Summit, a conference for Native American young people to gather, hear about Jesus Christ, grow in their faith, and fellowship together. 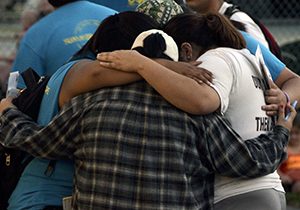 Ron Hutchcraft of Ron Hutchcraft Ministries reports, “It was the largest Warrior Leadership Summit in our 25-year history. We had 71 tribes represented, an amazing gathering.

“Our theme was Invincible: More Than Conquerors. That’s extremely significant for Native American young people because they are in the middle of such incredible battles — so much grieving, so much loss, so much depression, so much hopelessness, so much believing that their life will never amount to anything.”

The hopelessness is very tangible in Native American communities. Drug and alcohol abuse is rampant on Native reservations. The rate of sexual violence against Native women is two and a half times the national average. Suicide is an epidemic.

But when the Holy Spirit moves in the lives of Native young people, hearts and futures are completely changed.

“One out of five Native young people who attended that conference did not come with a relationship with Christ and left with Jesus in their heart,” says Hutchcraft. “It was a wonderful, instantaneous coming to the cross when we extended the Gospel invitation.” 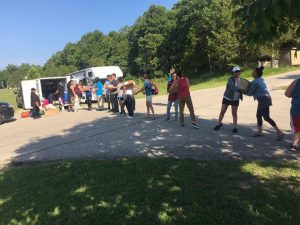 From the Warrior Leadership Conference, they launched the On Eagles’ Wings “Summer of Hope” team made entirely of Native American teens and young adults. Participants have given up jobs and ‘free-time’ during their summer vacation to go on this Gospel witness tour to Native reservations across North America.

Hutchcraft says it has been amazing to see God move through the witness of the On Eagles’ Wings team this summer as each person shares their personal Hope Stories of how Jesus Christ made the difference in their life.

“The pain-hardened, sin-hardened hearts around that basketball court just melt when they hear somebody from 2,000-3,000 miles away whose story is the same as theirs — except with hope,” he says.

“I have been eyewitness to hundreds of Native Americans choosing Christ in the past three and a half weeks. It is stunning to see them publicly go forward in front of everybody — you can’t say you didn’t do it tomorrow — and choose Jesus as their Savior, and then to be carefully counseled by our team members to be sure they understand it. Then that very night, we make sure that all the names of new believers are turned over to our partners there on the reservation who invited us, and the follow-up begins immediately.”

The team has been to nine reservations so far, and are currently at the tenth reservation – another community where hope is so needed. 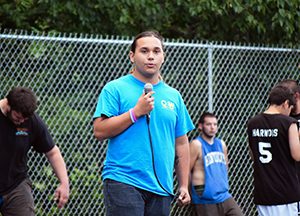 “Some reservations are the most Gospel-starved places I have ever been to. Literally, there is no place they hear the Gospel. Nobody goes there with a little Vacation Bible School for the kids. It seems like churches have no connection to some reservations.”

Sometimes it is challenging when there’s not just an absence of the Gospel, but even a resistance to it. And that happens from time to time on reservations the team visits.

“On reservations, there’s often a defense against hearing anything about Jesus because of the belief that he’s a white man’s God. We know that God so loved the world and that the world included everybody, not just a certain ethnic group. So there is sometimes a tremendous amount of spiritual resistance and great difficulty in talking about Jesus to people who have already decided that He is not for them.”

Hutchcraft goes on to explain, “These Native young men and women will be attempting to share their Jesus with people who often feel like this could not possibly be an option for them. But these young men and women have stories to tell of changes that have taken place in their life, and massive brokenness in their lives that has been…taken care of by Jesus.”

So this week, as the On Eagles’ Wings team shares yet again on additional reservations about the hope that Jesus can bring to young people and community leaders, they are calling on all prayer warriors in the Body of Christ to pray them through the week, knowing that eternity is being decided in the souls of those who are listening.

“Pray that God would open eyes that have been closed to Jesus, open ears to hear exactly how much He loves them, that He will give courage in hard situations and conversations to the warriors of the On Eagles’ Wings team, that He will go ahead of us and prepare the ground and soften what otherwise might be hard and closed hearts, and quite simply that there would be a breakthrough that could begin to change the climate and that for these precious people Jesus would become someone they realize they actually could consider and open their eyes to and that He is not the enemy. He is the best friend they could ever have.”

If you would like to give in support of the On Eagles’ Wings team as they continue their Summer of Hope trip, just click here to donate!