Uganda (MNN) — There seem to be two prevailing levels of awareness in relation to the famine in East Africa right now. Some people are very aware of what’s going on, but it’s been so long and so covered that there’s a sense of compassion fatigue — a “scroll through and see what else is in the news” reaction. 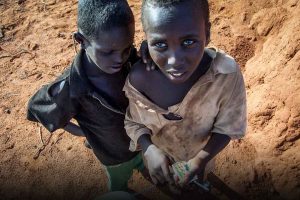 And then some people have genuinely not heard of it, asking, “What? There is a famine in East Africa?”

Yes, there is currently a famine in East Africa. A big one. People, children are dying every single day as their bodies give in to the starvation. Nations are sending aid and ministries are bringing in help, but it’s not enough to meet the need.

Gary Edmonds, President and CEO of Food for the Hungry, reports, “Right now in East Africa, it’s estimated that over 108 million people are severely hungry. There is famine, there [are] drought conditions. But in northern Uganda, specifically, we just had a team that is there. We are working there; we have been in Uganda for quite a number of years. We’re dealing with about 1.5 million refugees — South Sudan is one of the major providers.”

Food for the Hungry is part of the Alliance to End Hunger. Last month, FH even met with eight other organizations and political leaders in Washington, D.C. to discuss initiatives to end poverty.

The famine in East Africa is overwhelming. Heart-wrenching. But when people are dying, starving, and leaving their homes to find relief and hope, Edmonds says that’s exactly where the Church needs to be.

“Northern Uganda is one of the places of great need. One of my directors just came back and he said he looked on a field and…he couldn’t count the number of people, but he estimated there might have been a million people literally just sitting, lying in the dirt who were fairly new arrivals coming out of South Sudan.”

Edmonds shares the story of one particular refugee mother and her toddler. “She had trekked for nearly six months, found herself in northern Uganda, and she’s sitting there with a daughter [who is] highly emaciated, a daughter who was a two-year-old that weighs no more than 11 pounds — almost unheard of. But they barely are surviving right now, and she’s left to this state. She’s sitting there with a blank stare in the photograph, now having to simply beg with others around her.”

Many of the new refugees who arrive daily in northern Uganda have difficulty getting ration cards. And with no ration cards, these refugees — mostly women and children — are still left without food, water, and medical assistance. “They’re simply left to now become beggars,” says Edmonds.

That’s where FH comes in. Their ministry workers truck in food and water to the refugee camps in northern Uganda. They also send in medical teams and staff to help refugees get organized and access the physical resources they need.

But in addition to what any NGO can do, Food for the Hungry workers offer help in the name of Jesus Christ and are ready to give an answer for the hope that is within them as conversations arise. 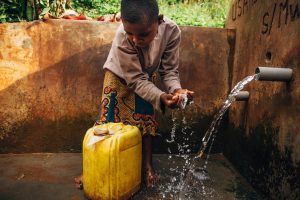 So what can the Church do in the midst of this crisis? “They need to pray for this. They need to become mindful of it, study it, look at it, read some of the news sources or seek it out,” suggests Edmonds. “At the same time too, [give] a contribution.”

World Food Program has partnered with Food for the Hungry to match every dollar donated right now. Click here to support Food for the Hungry’s ministry, and know that your dollars are having a resounding humanitarian and eternal impact!