Finding freedom of religion in Nepal

“Nepal has become the country where Christianity is growing at the fastest pace of any nation in the world,” says John Pudaite, President of Bibles For The World (BFTW). “The Body of Christ has been growing at almost ten percent per year, and we’re just blessed to be a part of what God is doing in Nepal.”

But why the sudden spiritual growth spurt? Pudaite says it comes from politics. “For centuries, Nepal was under a very restrictive monarchy and as the country opened up to democracy and developed its own constitution, all of a sudden people realized they did have a choice when it came to what they believed.” Christ’s message of mercy and truth is appealing to many, causing the Church to grow at an unprecedented rate.

Newfound freedom of religion also means newfound challenges, Pudaite says. “Some of the more fanatic Hindu and Buddhist groups are trying to say, ‘Well, there is freedom of religion, but you can’t convert.’” That means pressure on the Church and any groups that seek to evangelize to their neighbors. 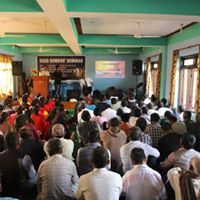 (Photo courtesy of Bibles For The World)

Because of increased pressure, many churches stay unregistered, since “once they become a registered entity they start to face a lot of scrutiny on their finances and on their activities.” Pudaite says one of BFTW’s on-the-ground partners had a government employee planted in their offices for two months monitoring all of their activities.

As the Nepalese Church continues to grow despite outside pressure, BFTW is helping resource partners in the country to reach the unreached in the farthest corners of Nepal. Over the past five years, they have supplied two million copies of the Gospel of John and 100,000 full New Testaments for the country. “We’ve been working through a network of about 1,800 frontline workers and they’ve been using our Scriptures in their evangelism as they share the Gospel with people in their villages and in their towns,” Pudaite says.

One of BFTW’s newest partners seeks to reach the “UUPGs” — unengaged, unreached people groups — in areas that are physically, culturally, and spiritually challenging to reach. BFTW is providing printed Bibles, translated electronic copies, and even audio Scripture so teams will be best equipped to share the truth of Christ with their neighbors.

But they can’t do it without your prayer and support. “We hear of persecution and oppression in different parts of Nepal, so just pray that believers there would be strong in their faith and continue to share the Gospel with their neighbors.”