Local churches assist in Bible translation in the Middle East

Middle East (MNN) — Sometimes ministries bite off more than they can chew and tackle projects that seem too challenging or overwhelming. However, when it comes to Wycliffe Associates, Bruce Smith says they love the chance to expand their goals as interest in Bible translation in the Middle East grows.

And interest has grown. “What started out as an initial foray into seven languages four years ago has now grown to 100 languages that are currently in process,” Smith said. “We’re translating Scripture into all kinds of minority languages in that region, and the vision is for another 80 to begin in the next month or years as we’re able.” 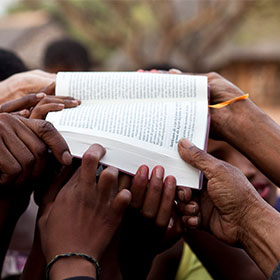 That’s because, despite ongoing persecution, Smith said many people are looking for light and truth. “The good news is that all this turmoil is not stifling the Church, it’s actually strengthening the Church just as it has through history,” Smith said.

Arabic may be the dominant language in the Middle East, but there are hundreds of minority languages and hundreds of eager believers ready to translate the Word into their own tongue. “They’re no longer content just having it in a majority language,” Smith said. “They want it in their minority language because that’s the language that moves their hearts. The Church is now ready to step up and take stewardship responsibility for God’s Word for their own people.”

In fact, the Church in the Middle East is so eager to help that the workers are already in place, as long as Wycliffe Associates can get them the technology they need to complete translations. They’re bringing Mobile Assistance Supporting Translation (MAST) technology to the Middle East and providing teamwork-based training for churches. By distributing laptops, tablets, translation software, Print-On-Demand technology, and even an oral translation device called a Translation Recorder, Wycliffe Associates is enabling the local Church to bring Scripture into their heart languages.

But letting local believers with minimal education assist in translation has caused controversy, causing some to wonder if speeding up the process sacrifices the integrity and accuracy of the translation. While Smith thinks it’s an important issue to consider and an understandable concern, he believes no one is as concerned with accuracy as the local Church.

Smith said God has already moved in the Middle East in extraordinary ways, and he encourages readers and listeners to keep the Church in their prayers. “These kinds of stories don’t get the front page, but they are the backstories behind all of the headlines,” he said. “God is at work in these arenas and we need to remember that there are still thousands of groups that don’t have even one verse of Scripture in their own languages.”

You can also donate right now to become a part of the Wycliffe Associates translation team, though even then, Smith recommends you go to God. “Prayer is an important, empowering tool that God has given us to align with His will and to help us accomplish the things that He wants us to accomplish.”