Boko Haram captives released, but not yet home

Nigeria (MNN) — Three years ago, over 200 Chibok girls were kidnapped from their boarding school by Boko Haram militants.

Now, they’re starting to come back.

According to Todd Nettleton of Voice of the Martyrs, “We know of 81 girls that were released in May. They are all currently in Abuja, the capital city, under what I guess you would call the control of the Nigerian government.”

But being free isn’t the same as going home.

“Recently our staff was in Nigeria and met with a lady named Elizabeth,” Nettleton said. “Her daughter Mariam was one of those who was abducted but has not been returned. Since May, Elizabeth has spent a total of 24 hours with her daughter.”

Why was this mother only allowed to spend one day out of three months with her daughter? “The government says that they are ‘deradicalizing’ them, helping them recover from their ordeal,” Nettleton said. 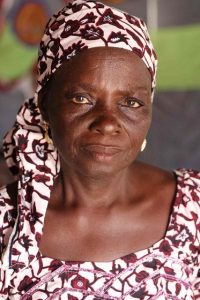 Elizabeth, mother of one of the freed girls. (Photo courtesy of Voice of the Martyrs)

Though the Nigerian government hasn’t made the details of this ‘deradicalization’ process public, Nettleton said they have announced that “there was some concern that some of the girls had accepted Islam and had maybe even become radical Muslims.” This decision was especially influenced by the attack of a suicide bomber suspected to have been a former captive of Boko Haram who bought into militant propaganda.

Though their concern might seem understandable, so is the frustration of families that face a new barrier between their children and their homes. “If someone in my family had just been set free after being held for more than two years, I would want to spend every waking moment with them. I would want to be with them continually,” Nettleton said. With the government keeping quiet, it’s hard to tell when things will change.

That’s particularly frustrating when girls like Mariam relied on their faith in God to keep them going. Mariam managed to take a Bible with her when she was kidnapped and read Scripture daily without being caught.

As always, Nettleton said our most powerful weapon is prayer and encouragement. 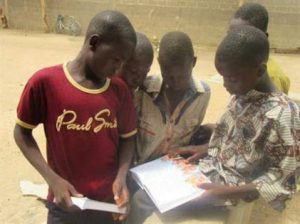 Distributing Bibles in the region the kidnapped girls were from. (Photo courtesy of Voice of the Martyrs)

“One of the main ways that we can be involved is simply to pray for them and pray that God would bring healing to them. For those who are still held captive, we pray for their freedom” as government officials negotiate the release of the remaining girls.

You can also contribute to Voice of the Martyrs as they operate on behalf of Nigerian believers. A team recently visited the country to distribute bicycles and motorbikes to pastors so they can meet their congregation members in their homes, and they’re fighting off a food crisis thanks to your contributions.

Remember Mariam and the other girls in your prayers as they await their release.