That’s why as business-as-missions models are becoming more and more popular, Global Disciples is stepping up to provide their own experience and ideas to other organizations just beginning to venture into marketplace missions.

“We’ve learned more from the different areas that we’ve traveled [to], like Ethiopia and Nepal and Bangladesh. They’re the ones that can help us make this training really work,” said Eric of Global Disciples. They want to share their experience in these and other countries so other organizations won’t make the same mistakes and can prepare for situations they might encounter. 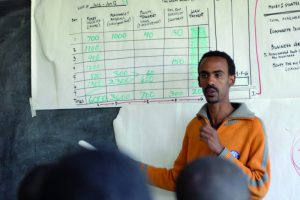 “Part of our DNA has always been to work alongside people who may have very similar thoughts within the Kingdom, so it wasn’t a big jump for us to move to the U.S. to work alongside other agencies,” Eric said. Global Disciples is already working with 30 other groups, and their network of indigenous leaders is always growing.

A business-as-missions training class in the United States just finished, which will add several workers to that network. “You would think if it’s a business training, it would be all about business or accounting or records; and that is part of it. But we’re also looking at the biblical guidelines for being businesspeople,” Eric said.

The condensed version of Global Disciple’s normal leadership training helped dissuade the belief that real ministry can only be done through a traditionally ‘Christian’ career such as being a pastor or a full-time missionary.

But why the sudden interest in business-as-missions? “In many of the places that we go, they’re not welcoming missionaries or people who are just there to share the Gospel. But using business as a bridge allows us to go into those communities,” Eric said. Global Disciples believes business gives believers a reputation and a link to relationships in otherwise closed-off communities.

And Christians around the world are taking advantage of these new strategies.

In Myanmar, one leader traveled for five days to reach a Global Disciples business training class because, he said, “I realize the importance of training the tribes, many of whom don’t even have any currency. They can use what God has placed in their hands to reach the next village.” 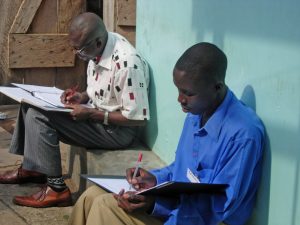 In Africa, a student jumped to his feet in the middle of a session to claim that business and missions could never mix. But by the end of the class, he had plans to use business methods to reach refugees in camps with the Gospel.

In India, a man who was considered “untouchable” because of his stature used skills he learned in the class to build his reputation as a businessman. Now he uses his influence on his village to share the truth of Christ.

In an undisclosed nation, an underground church chose to participate in marketplace training so they could begin an outreach project to impact a nearby Muslim village.

Stories like these are why Global Disciples is continuing to equip Christian leaders to operate in missions and in the marketplace, but they need your help to do it. You can attend a class, give to Global Disciples, or pray for the work they do. Click here to learn more!