North Korea (MNN) — The war of words between North Korean dictator Kim Jong-Un and United States President Donald Trump has been heating up already volatile tensions. Most recently, North Korea threatened to launch missiles at the U.S. territory of Guam. 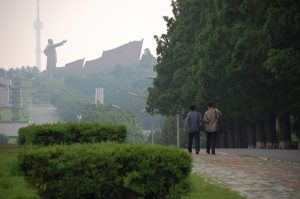 Kim Il-Sung statue on Mansu Hill in the background. [Photo, caption courtesy of (stephan) under Creative Commons via Flickr: https://goo.gl/kvynxz]

Trans World Radio has ministry operations in Guam, and Lauren Libby with TWR explains, “On Guam, you look and there are about 170,000 people and an awful lot of military at Anderson Air Force Base on the north end of the island. There’s a big marine base, there’s a naval base, so that really is kind of the point of the spear from the United States’ point of view if anything should ever happen in the China sea all the way up to North Korea.”

Officials in Guam have since updated warning sheets and preparedness plans for its residents in case of a missile or nuclear attack. Guam Homeland Security spokeswoman Jenna Gaminde says if North Korea fired a missile at Guam, it would take only 14 minutes to reach the island. However, Mike Pompeo, Director of the Central Intelligence Agency, assures that an attack from North Korea does not seem imminent.

But even as North Korea postures with missile launch threats, TWR in Guam has already been launching something else into North Korea. Something they can’t shoot down. Something that has extreme impact. Something that combats the stalwart grip of tyranny and fear and hatred — radio broadcasts of the Gospel.

Libby shares, “We take Korean programming, we produce programming in Seoul, and it’s backhauled by the internet and broadcasted from Guam every night. And we know there are listeners because we get responses back out there. People actually take their lives in their hands to make a response, to get a letter out or some sort of message out of North Korea letting us know that they’ve been listening.

“I think it’s kind of like one of our missionaries said: ‘You know, the North Koreans may lob missiles at Guam, but we’re going to lob hope back in response.’ And I think that was an excellent analysis of the situation as to how TWR views it.”

In doing so, TWR is encouraging the remnant Church in North Korea. But the job is risky. North Korea is the number one persecutor of Christians, according to Open Doors’ World Watch List. And an outside radio is considered an illegal commodity in North Korea.

“The stories we’ve got is that people who have a radio keep it in a plastic bag and will bury it during the daytime and then dig it up at night and listen to the broadcast. A lot of times, people listen in very small groups in homes. We know that there are groups of believers in North Korea and we know that the Church is alive and well and probably growing under persecution.”

TWR currently hopes to increase their programming into North Korea by up to two hours so they can reach more people, whoever can listen, with the Good News of Jesus Christ.

As for the missile threats coming out of North Korea, Libby says their staff members in Guam are staying alert while staying on-mission.

“I would say they are not panicked. They are concerned [and] they are taking efforts to prepare for whatever comes down the road…. For our staff there, I would say it’s probably just really deep in their commitment to the fact that every night with 250,000 watts and big short-wave transmitters, we speak as much hope as we can in there, in the midst of a situation that is deteriorating. Because if something does happen, there is only one place to find hope, and that’s Jesus.”

For now, Libby encourages believers to pray with confidence in God’s sovereignty. “We really need to pray for the situation, because it’s not the United States and it’s not North Korea [in charge]. Jesus is still the King of Kings, the Lord of Lords, and nothing has escaped His notice…. Let’s just really pray that the Lord would take care of this situation and be actively involved in it.”