Sierra Leone (MNN) — Disaster struck the city of Freetown in Sierra Leone when torrential rains caused sudden landslides and flooding early Monday morning. Many didn’t have time to run and several people were still even asleep in their beds.

Between 300 and 400 people have been found dead so far and at least 600 others are missing, according to the Red Cross. Up to 3,000 individuals have been displaced.

A week of mourning across the country formally began yesterday, marked by a minute of silence at midday, and Sierra Leone has declared a national emergency. It’s one of Africa’s worst natural disasters in recent years.

Cynthia Williams with Crossroads Prison Ministries shares, “We’ve been watching and praying with our Crossroads Sierra Leone team as they battle through the devastating floods and resulting landslides that have hit that area. 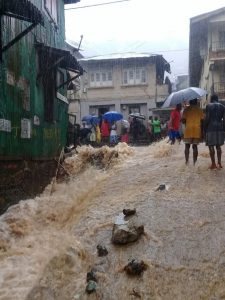 “Entire families have lost either their lives or, of course, their homes in the flood. Just finding shelter is very difficult as the rains continue and are projected to continue. People are without food [or] drinkable water. Roads and bridges are flooded and, of course, thousands of homes are left without power. These rain-swollen rivers of surging water are just flowing down the Freetown streets and overflow into homes, causing more landslides and sweeping people away.”

While Sierra Leone is prone to flooding, they’ve had over twice their average amount of rain documented this summer, according to CNN.

And in a country like Sierra Leone that has already been through so much, a disaster like this is especially harmful. “This is a country that has, not long ago, been through a terrible and devastating civil war and genocide, so there is a lot of recovering going on in many areas.”

Crossroads has received communication on the situation from their Sierra Leone Director Lahai Kargbo. Williams shares, “He and our team of mentors are all safe. He said, ‘We are safe and dry,’ so we are thankful for that for the moment.” 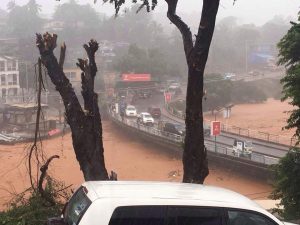 “There are no reported deaths [in the prisons] yet because they haven’t had an opportunity to really assess, but they have received word. For example, one director in the juvenile prison in which we work in the east part of Freetown reported this morning that their compound was flooded and their food supplies have been ruined — which is a significant issue since these supplies are normally very scarce anyway as there is very little government support for food for prisoners in general. And of course, with a disaster like this, it just makes it very acute.”

Williams shares, “Our team will be visiting the juvenile prison today. They’re hoping to be able to get out and around. Of course, mobility is definitely an issue, but they want to get to the juvenile prison specifically to be able to assess the situation, encourage the boys being held there, and spend time with them. And then our team members will also be going out into the communities today to minister, to pray for people affected by this, give them a word of encouragement, and to see where they can help.”

Currently, Crossroads Sierra Leone is hoping to send funds to provide immediate assistance to their team working on the ground and mobilize support for basic needs like food and drinkable water for the prisons.

They’re asking for your help as they send financial support and spiritual encouragement to Sierra Leone, acting as the hands and feet of Christ in crisis.

“We, of course, are asking for prayer — I think that’s the greatest thing we can do — for continued safety, for the provision of needs that our team especially will be effective, and just really ministering and being a reflection of Christ in that environment now.”

Also, says Williams, “We would need the financial support for food [and] drinkable water. Many of them have lost all possessions…. We are encouraging anyone interested in coming alongside to contact us. You can call us at 1-800-668-2450 or you can email us at intl@cpministries.org or you can just visit us on our website.”