Russia (MNN) — As summer winds down, ministry groups are reflecting on how God worked through their summer projects. We’ve got a couple of more reports from our friends at SOAR International.

We left off with SOAR as they were ending their time in Ryazan. Just before they left for Podolsk, the group joined in a two-day rafting trip with members of the transition home, people from the churches of Ryazan and Moscow, as well as some kids from the area. Among the group were Christians and non-Christians. 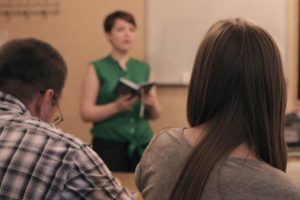 After each day of rafting, the team set up camp and ended the day with devotionals. While the trip was a fun summer activity, it was also all about relationships and getting to know one another and spending quality time with each other.

The theme of establishing and building upon relationships was carried into the next two weeks in Podolsk where SOAR assisted with a two-week English intensive program.

Mangione says, “The English intensive program was five hours of English classes plus an hour of lunch and then an evening four hours as well.”

Every morning, they held two classes for youth and lower levels. Each class had two teachers and together about 30 kids participated. Along with traditional class time, the kids spent time outdoors with learning and practice activities. At the end of each week, they presented a skit utilizing the English they’d learned that week.

In the evenings, English classes were offered to adults. About 15 people from the community participated this year.

English is taught in the schools and so many of the kids were there to supplement what they’d learned so far and improve their grades. English is important for future job opportunities. And some kids just want to hone their skills for future travel. Adults can find the training helpful for current jobs as well.

While providing quality English training was one of the goals of this program, it wasn’t the main goal. Mangione says the main goal was to build relationships with members of the community. The program was not religious; the Gospel was not part of the curriculum. However, it was held on church grounds — a significant fact considering the general societal attitude towards Christians.

Mangione says that some people in Russia believe that Christianity is a cult. And so, for many of the participants, this was the first time they had ever stepped foot on church property. But over the two weeks, they got to interact with Christians and see that the Church is a safe and comfortable environment. Programs like these act as building blocks for future ministry for the local Church. 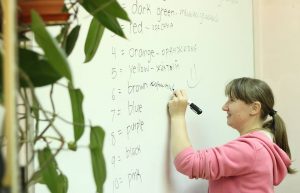 But even during the program, some of the students began to start conversations about spiritual things and ask deep questions. One girl sat next to the pastor at every meal to discuss philosophical matters.

Another girl who lived too far away to commute stayed at the church over the weekend and attended Sunday services. She enjoyed the service and wanted to talk more about it. This was a huge answer to prayer as the girl seemed to profess atheistic beliefs.

The SOAR team got to express their genuine care for the community not only through the English classes, but through food. Twice during the program, they cooked American fare for those attending the program. They made chili with garlic bread, and pizza with lasagna soup.

And while it was an exhausting ‘go-go-go’ summer, Mangione says, “The team did an amazing job. I was very grateful for the volunteers that we had this year. They were ready to jump in and do whatever was needed and were great teachers.”

Much of the team flew back home after Podolsk with a small team remaining for the final project. We’ll share how that project went, tomorrow. In the meantime, would you pray that this fun and memorable summer program would be the starter point for these kids and adults to want to know more about Jesus?

To learn how to partner with SOAR throughout the year, click here.