Middle East (MNN) — Of Syria’s 11 million displaced people, at least half of them are children. Many of them know nothing but conflict and are traumatized by the violence. 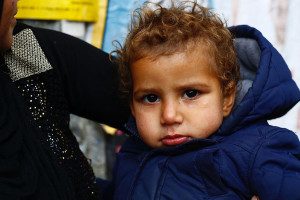 Biblica is one organization working to counteract their suffering by providing the only type of healing that lasts for eternity — the Gospel.

Biblica recently printed an Arabic version of its resource called “The Survivors”, a 32-page Scripture booklet designed to help children make sense of their suffering from a biblical perspective.

“It doesn’t have a lot of text. It has great references to Scripture. It has lots of art and color and engaging things for kids to kind of help them walk through what they’re going through,” Biblica’s senior director for partnerships LaReau Anderson says. “What we have found out is that there are not a lot of resources available for children that are going through these types of crisis situations.

Anderson says the book is designed specifically for children aged 7-11 and deals with emotions such as fear, loneliness, and anger. It includes Scripture passages that speak specifically to these different emotions to help children deal with whatever struggle they’re facing.

“This ties in very close to our heart and our mission in terms of creating Scripture resources that can engage people in whatever situation that they’re facing,” Anderson says. “To bring God’s Word front and center in the refugee situation is quite breathtaking because God’s Word has so much to say about those that are suffering and those that are in a crisis situation.”

Biblica isn’t going about this mission alone. Biblica partners with multiple organizations working in the Middle East to bring the healing presence of the Gospel to those who are suffering.

“We listen very, very carefully to the needs of our partners. We’re so partner-driven,” Anderson says. “Biblica doesn’t really have any projects of our own around the world. We come alongside ministries that are working, for example, in this refugee area, groups such as Samaritan’s Purse and World Vision and many other organizations that are working in these situations. 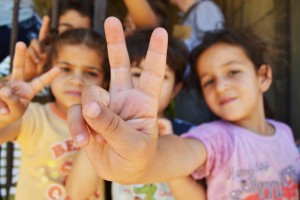 Syrian refugee children at a half-built apartment block near Reyfoun in Lebanon, close to the border with Syria, give the peace sign. The families fled Syria due to the war and are now living on a building site. (Photo and caption courtesy of Eoghan Rice via Flickr)

“We come alongside them and listen to them and help to understand what the needs are. Then we bring God’s Word kind of front and center in that and say, ‘How can we help you? How can we assist you by bringing God’s Word into these situations?’”

The refugee crisis is a tense and very political topic. Anderson says that no matter what your views are, God’s Word must remain at the forefront.

“It doesn’t matter where you land politically on this issue,” Anderson says. “The fact is that over 30 million people are caught in this refugee melee. And you know what? It’s God’s Word that is so comforting and so powerful and can change lives and give people perspective and bring people to Jesus and bring them closer to God.”

Can you come alongside Biblica’s efforts as it brings the hope of Christ to the Middle East? Anderson asks that you pray for their work with partners in this region. You can also support Biblica’s work financially by clicking here.