Keys for Kids reaches children for Christ with stuffed animals

USA (MNN) — Around the world, there are over a billion children who have never heard of Jesus, and many of them are thirsty for spiritual truth. 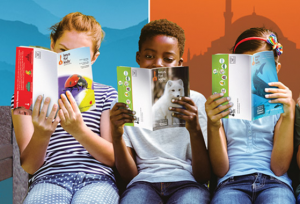 (Photo courtesy of Keys For Kids)

Keys for Kids is one organization that has spent the last 75 years making sure children around the world hear about Jesus. Through their Creature Feature Storytellers, Keys for Kids is meeting children right where they are by using something they’re already familiar with — stuffed animals.

“We’ve taken our Keys for Kids devotional, put them into audio form, and put them on this solar-powered device,” Keys for Kids Executive Director Greg Yoder says. “And there are probably a year’s worth of stories on there that point people to Scripture, which is also kind of cool because there is a full audio Bible on these storytellers as well, and the holder of these storytellers is a Creature Feature. It’s a stuffed animal.

“Right now we’ve got tigers that we’re making available, and then with each tiger that we send out, we have a Creature Feature story that goes with it to outline what this tiger is about, how God created it, some of the cool things that they enjoy doing, et cetera.”

The Creature Feature Storytellers are currently only available in English, but Keys for Kids is working with organizations to complete translations in Spanish, Greek, Macedonian, Albanian, Mandarin, and Arabic.

“The issue that we have right now is just letting people know that they’re out there,” Yoder says. “We do have them available, we’re selling them, but we’re also partnering with organizations and taking donations from people to get them placed with some organizations.

“For example, we’re working with an Indian organization in the United States. They’re working in Pine Ridge, and we’re wanting to make sure that we get these units into the hands of some of our friends there because it’s an oral culture in South Dakota. Many of the Indian Reservations or First Nations youth desire these things. They want to hear stories. They want to understand Scripture.” 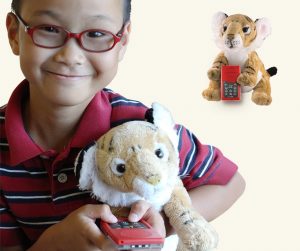 (Photo courtesy of Keys for Kids)

Yoder says Keys for Kids hopes to complete translation projects in 100 major languages over the next 5-10 years. The goal is to make sure as many children as possible around the world have the opportunity to experience God’s truth.

“Eighty percent of kids around the world between the ages of four and 14 have a desire to know spiritual truth,” Yoder says. They want to know the truth. The question is, what kind of truth are they going to receive? Is it going to be a form of truth, where they’re actually getting lies about who Christ is and what God has done for them and their need of a Savior? Or are they going to get the truth that’s found in God’s Word?”

Can you help put the truth of the Gospel in the hands of children around the world? You can purchase a Feature Creature Storyteller, or donate to this initiative here. You can also help by raising awareness on social media.

Finally, Yoder asks that you pray that Keys for Kids’ work would align with God’s will and that people would get excited about this project and want to get involved.