USA (MNN) — Category 4 storm Hurricane Harvey struck southern Texas on Friday, the first major hurricane to hit the United States since Hurricane Katrina 12 years ago. Winds clocked in at 130 mph, and flooding in Houston and along the Gulf Coast was measured by feet. Two people have been killed, but a final count on the death toll may not come in until later as that number is expected to rise. 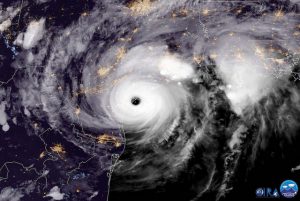 GOES-16 captured this geocolor imagery of Hurricane Harvey on the verge of making landfall on the Texas coast on August 25, 2017. (Photo, caption courtesy of NOAA Satellites via Flickr: https://goo.gl/mbVDiw)

In Houston, 4,000 National Guard members were activated on Sunday for rescue efforts. The Coast Guard saved over 100 people from rooftops and carried out around 2,000 multi-person rescues.

And the storm still isn’t over. As of Monday morning, rains from Harvey still were labeled at tropical storm level as it heads towards Matagorda Bay and the Gulf of Mexico. Afterwards, Harvey is forecasted to swing back towards Houston and Galveston for one more rainy bout on the already battered towns later this week.

Saturday and Sunday were the two wettest days Houston has seen since 1930, according to CNN. Houston’s average rainfall each year is about 25 inches. In the last two days, they’ve gotten at least that much, with another 25 inches expected throughout the week.

Bob Laarman, Director of Disaster Response Services with World Renew, says their ministry is keeping an eye on the situation and will go down to Texas for relief projects in the aftermath. 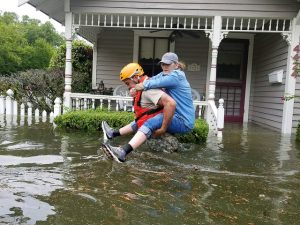 “We are certainly in partnership and communication with a lot of different organizations right now and there are some that are obviously the first responders…. There’s food on the way and water on the way and people are setting up shelters or beginning to. It’s even difficult now with the storm still ongoing and rain still falling,” Laarman explains.

“Our part…will come some months down the road when we send in people to do needs assessment, find out what damage people had, what needs have already been met, and what still needs to be done. Then we partner with local organizations in those areas to send volunteers, and we send volunteers for months and sometimes even years — and I expect, in this case, it will be years from now we’ll still be there repairing homes with volunteers.”

Local officials say as rains and floods continue this week, at least 30,000 people may be displaced and around 450,000 will be forced to seek disaster assistance. 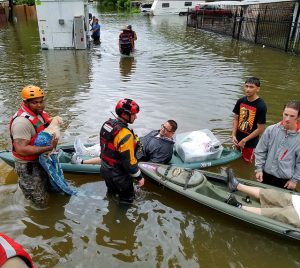 “The heartbreak continues I would say when we go in there six months, nine months, a year later and people are still not in their homes,” says Laarman. “The joy of this work is to partner with local communities and partner with the people and help them rebuild their homes. They have new homes, their lives get re-established, but their hope gets re-established, and that’s the part that brings tears to your eyes.”

World Renew carries out disaster response in times like these out of obedience to Christ, and the people notice. But first, they need to build up trust.

“Our volunteers go full of desire to show God’s love and to help, but it’s not uncommon for them to be met with suspicion. The people are wondering why these people are coming from across the country to help them; they must have some hidden agenda. And people have been taken advantage of. In storms like this, bad people come out to take advantage of people and take their money. So they’re often leery.

“But it can take days if not a couple weeks to work with people to restore their homes, and by the time we’re done, they realize that our volunteers are there because of the love of God and they’re able to share their testimony over the days working on the home,” says Laarman.

“The people really do get a chance to see why we’re there and how great our God is and how we want to serve Him by doing this.” 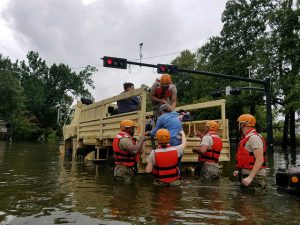 Texas needs the aid of the Church right now. There are a few ways you can help today. “Obviously, all this takes money. So donations to World Renew are always welcome. But then also, we need volunteers to go out and do the work, do the needs assessments, and do the reconstruction.”

Click here to check out volunteer opportunities with World Renew, or you can also give online to Hurrican Harvey relief efforts through their ministry here.

And, of course, Laarman says we should never underestimate the impact of our prayers. “We know the power of prayer and invoking the presence of God in the midst of a storm is part of what we do as believers. So continue to do that.”