Turkey (MNN) — When Jesus told His followers they would face opposition and trial in this world, He wasn’t kidding. Andrew Brunson, an American pastor who’s spent over two decades serving in Turkey, is facing those types of trials this very day.

Todd Nettleton of The Voice of the Martyrs USA says earlier this month, they were hoping to hear that all charges against Brunson had been dropped. But the actual news leaned towards the other end of the spectrum. 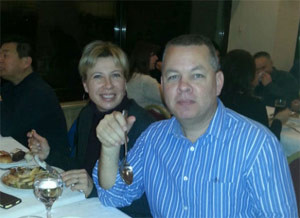 “Instead, they’ve now added more charges against Andrew Brunson — charging him with gathering state secrets for espionage, attempting to overthrow the Turkish parliament and government and change the constitutional order.”

And as the government continues to go in the wrong direction of justice, the question is, why?

Over the last year, Turkey has been caught up in the harried cycle of chaos and control. Chaos followed 2016’s failed coup and allowed Turkey’s President Erdogan to gain more control over the nation. Since then, the nation has been in a declared state of emergency.

Nettleton says, “When you think about who has undermined the rule of law in Turkey over the last year, it certainly is not Andrew Brunson.”

In fact, big moves have been made recently to move the state more and more towards a dictatorship.

As to why Brunson has been targeted in particular? Nettleton says while its speculation, he believes that the Turkish government may be trying to trade Brunson for Fathulla Gülen, an Islamic cleric living in Pennsylvania. The Turkey government blames Gülen for leading the failed coup. He is now living in self-imposed exile.

Turkey is number 37 on the Open Doors World Watch List which ranks the nations where living as a Christian is difficult. Believers face trouble from political and ethnic standpoints as well as from radical Islam. There is increasing pressure to “Islamize” Turkey in a nationalist movement.

Brunson’s case is significant not just on an individual level, but for all Christians living in Turkey.

And as things continue down this road, Nettleton says we will see more than just religious freedom disappear.

“This is one chapter of that story of how a government and a country is really moving more towards totalitarianism, more towards dictatorship, and away from human rights and away, really, from constitutional democracy.”

Right now, believers have to re-evaluate how they live out their faith in Turkey. For instance, are there different methods of sharing their faith that might help them stay out of hot water? Either way, Nettleton says, the call of Christ will stay the same, and believers will continue to obey it.

“All of those people have to evaluate based on the call of Christ to go out and make disciples. And we understand that there are times that that call is costly. And Andrew Brunson is experiencing that right now. Who knows who else in Turkey will have to experience that during this kind of wave of oppression that’s going on there.”

As we consider situations like Turkey, our first and most powerful line of defense is prayer. First, we can pray for the nation — that justice and human rights might be established here.

Third, we can pray for Brunson and his family. October will mark one year since his imprisonment and the first charges were brought upon him. He has not had a trial yet. It would be easy for anyone in his position to grow discouraged.

Pray also for opportunities for him to be a witness for Christ, be it in the prison or courthouse.

To learn more about how you can help the persecuted Church, click here.