Why should the Muslim Hajj matter to Christians?

One Christian Radio > Mission Network News > Why should the Muslim Hajj matter to Christians?

Middle East (MNN) — Today is the second day of the Hajj, a five-day pilgrimage to Mecca, Saudi Arabia and one of the major tenets of Islam. All Muslims who are able to are required to participate in the Hajj at least once in their lifetime. It started this year on August 30th and will go until September 4th. 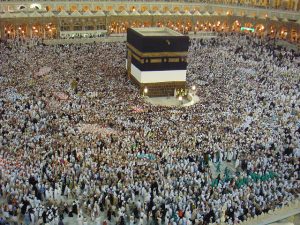 Muslims at the start of Hajj in Mecca. (Photo courtesy of Al Jazeera English via Flickr: https://goo.gl/9wbRyT)

Last year, Iranians did not participate in the Hajj after a tragic stampede killed hundreds of people in 2015. Saudi officials say around 800 people died in the stampede set off by two groups colliding. But the BBC says an unofficial tally put that death toll closer to 2,400. Qatar is by-and-large sitting out this year’s Hajj due to ongoing disputes with their Saudi neighbor.

Bob Blincoe, President of Frontiers USA, says for those completing the Hajj this year, there is a list of things Muslims must do.

“When you hear about the Hajj requirements, it’s all very legal based, very rule based. If you don’t complete it by sundown, you have to start it again the next day. It’s seven times counter-clockwise around the Kaaba [Stone]; try and touch the stone if you can. If you can’t, put your hands out towards it. Then you run back and forth between two little hills seven times like they think Ishmael’s mother did when she was looking for water…and then throw stones at these three pillars which represent Satan.” 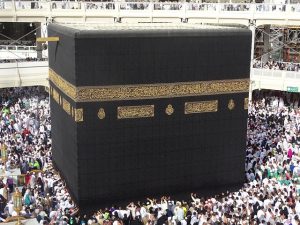 The Kaaba is built around a sacred black stone which Muslims believe was placed by Abraham. “This isn’t true of course,” says Blincoe. “Abraham was never near Mecca, and the stories that we have of Abraham take place much farther to the west in the Holy Lands. But it is their belief.”

If a Muslim completes the Hajj, they are called a Hajji, a very important title.

However, Blincoe says they have heard stories of Muslims who went on the Hajj and instead found Jesus. One story is from a man named Ali and his wife Zera in Eastern Turkey.

“[Ali] was an alcoholic and he says he used to beat his wife,” shares Blincoe. “But he went on this Hajj and there Jesus Christ spoke to him in a daytime vision. He went with a group of friends, they rode in a car, and Jesus Christ told him to get out of the Hajj experience.”

Ali went back to the car and did not complete the Hajj, feeling rather shaken by his encounter with Jesus. After that, Ali became a Christian and it completely transformed his life. He turned away from drinking and reconciled with his wife, Zera.

Today, Ali is an outspoken advocate for his faith in Christ and the Gospel. 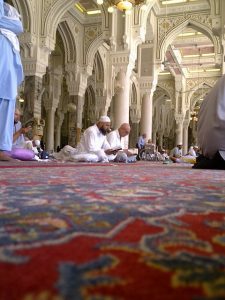 Muslims in a mosque in Saudi Arabia.

“He returned to Eastern Turkey and he is a pastor there, which is very dramatic in this country which has no category for a person who was born Muslim and is now a Christian.”

Blincoe points out that another interesting aspect of the Hajj is that it happens the same time as Eid al-Adha when Muslims remember “the day when God provided a sacrifice instead of [Abraham’s] son. That story is taken directly from the Bible and changed in important ways by Islam. But it can be used by Christians because of the great person of Christ who Himself was the Lamb of God who takes away the sins of the world.”

Blincoe personally lived for seven years in the Middle East and says that Eid al-Adha was a great conversation starter with his Muslim neighbors.

“This time every year the [Muslim] family would sacrifice a lamb and they would reenact the story of Abraham and his near sacrifice of his son. That happens at the same time as the Hajj. And every year, the child would somehow come to our house and knock on the door and give us choice pieces of the lamb. And you know, that’s an opportunity for a Christian to say, ‘Thank you! This reminds me of Jesus Christ, the Lamb of God who takes away the sins of the world.’ And that child would go back to the family then and dad would be interested to know what the Christians said in response to getting this lamb.”

So why should the Muslim Hajj matter to Christians? It’s an opportunity to open up faith conversations — like the ones Blincoe would have with his Muslim neighbors during Eid al-Adha — and an opportunity to pray.

Blincoe encourages, “Let’s pray for Muslims who are longing to go on the Hajj and think that is the way the Lord has left for them to follow him, and let’s pray that they might find the way out like Pastor Ali has found.”