International (MNN) — When it comes to modern missions, it seems teamwork is the name of the game. More and more organizations are partnering up with other groups to maximize their impact for the Gospel, and Bibles For The World is no exception.

According to the organization’s president, John Pudaite, Bibles For The World has been working in Africa alongside the Luis Palau Association.

“Luis’s son Andrew has had a calling to reach 10 of the major countries of Africa with the Gospel by holding festivals, not only through open-air crusades but with community-wide outreaches,” Pudaite says. These outreaches will touch schools, prisons, orphanages, and medical camps, and special programs will focus on people who wouldn’t be able to attend the rest of the events like civic leaders, businessmen, and politicians.

Photo Courtesy Bibles For The World

Plans for the events and crusades were in place, but they were still missing one thing; Bibles. Pudaite reports they wanted to have 12,000 Gospels of John to provide to new believers throughout the festival. A former Bibles For The World employee reached out to his old co-workers for help, and they responded.

Now, three years later, “We have been blessed to be able to come alongside them and provide scripture for each of those events, and often that’s the Gospel of John, Bibles, New Testaments, different things for the different events during a one to two week festival.”

“We’ve been able to provide at least 100,000 Gospels of John for every crusade that they’ve had and 10-15,000 New Testaments for new believers who come to know the Lord through these festival outreaches,” Pudaite says. 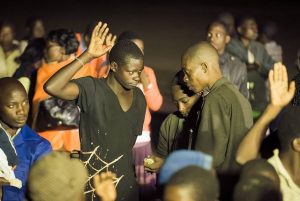 Photo Courtesy Bibles For The World

The festival has already been successful in Burkina Faso and Malawi, and this year they’re adding Côte d’Ivoire to their destination list.

But the real impact of these events comes after the festival is over.

“In each of the countries where the Palau organization works, they set up wonderful networks with the Christian churches there. In Malawi and in Burkina Faso I believe there were over 800 churches [involved in the network],” Pudaite say. That means after each crusade, anyone interested in becoming a believer is connected with a church and its leaders.

Want to help? Pudaite says your prayer and support can make all the difference. “The small part that we’re playing in providing scripture, it’s carrying through and plugging these new believers into the body of Christ.”