Church in Japan leaves the bar for new building

Japan (MNN) – A couple of months ago, we told you about pastor Takahiro Ami in Sendai City, Japan, who held his church services in a local bar. It was smelly and crowded, but it was the only place they could find. 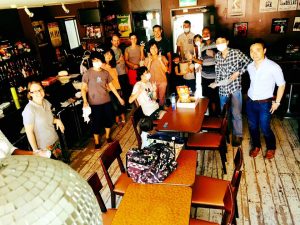 Pastor Ami’s congregation cleaning up after their last service in the bar. (Photo courtesy of Takahiro Ami via Facebook).

“He is cutting new territory with church life in Japan by meeting outside of a traditional church building,” Handley says.

“Even just his step into a bar was courageous, and now, to take this to another level, where they’ll have more accessibility for families, is quite remarkable.”

Ami is part of a group of younger pastors being trained by Asian Access. Handley says in Japan, where Christians make up only about one percent of the population, it’s unusual for a church to meet anywhere other than in a traditional church building. Still, despite meeting in a bar for ten years, Handley says Ami’s church has played a huge role in meeting the country’s spiritual needs.

“It’s been very interesting, especially in light of the post-tsunami, post-earthquake scenario that hit that region, where people are very open to the Gospel like never before,” Handley says. “In fact, the response rates to Christ since the disaster have been seven times normal, which is unbelievable.

“So he came with this new idea, this fresh idea, at a perfect moment in time, when people were really just hungry for people to help them. They were looking to kind of meet needs that they didn’t know they might have, kind of hungry spiritually in the midst of all the loss they were facing.”

Handley says Ami is casting a great vision for the Church in Japan. His goal is to one day see churches become as common as convenience stores. 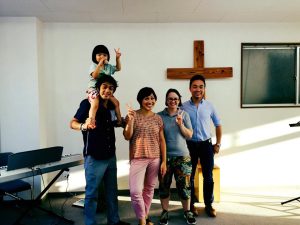 “They have said, in order to truly impact Japan for Christ, we need a church just like every convenience store, which basically is every corner in Japan,” Handley says.

“They’ve done studies, and there are 55,000 convenience stores in the entire nation. And so now this generation is bold enough, with just about 8,000 churches, to say, ‘We need to go big and pray for 55,000 churches in the coming years ahead.’”

You can support Asian Access’ work financially by clicking here.