Cuba (MNN) — Hurricane Irma was the first Category 5 storm to make landfall in Cuba in over 80 years. While Florida Gov. Rick Scott ordered an evacuation almost immediately as the hurricane built, the Cuban Civil Defense waited until the 11th hour to declare an “alarm phase”. 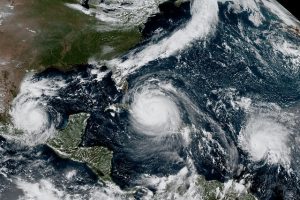 GOES-16 captured this geocolor image of three hurricanes in the tropical Atlantic on the afternoon of September 8, 2017. Left to right, they are: Hurricane Katia, which made landfall in Mexico that night. Hurricane Irma, which was passing between Cuba and the Bahamas; and Hurricane José, which was churning in the open ocean. (Caption, photo courtesy of NOAA Satellites via Flickr: https://goo.gl/kxyXA4)

Towering waves as high as 30-feet surged into Havana, the capital of Cuba, and devastated the north coast last Friday. Over 4,000 homes in Havana alone were damaged and 10 Cubans were killed.

Cuba’s economy and tourism is expected to take a major hit as the nation focuses their efforts on rebuilding, which will likely take a very long time.

Rosa Contreras Hart with Christian Aid Mission reports, “We got confirmation that at least three ministry workers have lost all their possessions and the multi-use hall where Bible trainings were held was destroyed. Given the immensity of its size, practically no region escaped its impact.”

Christian Aid is working with an indigenous ministry partner in Cuba as they provide aid and relief for hurricane victims. Contreras Hart says, “They know the language and the best way to reach out with the Gospel to their own people.” 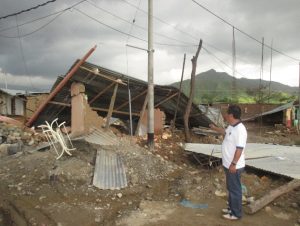 The indigenous ministry will distribute “water, cooking oil, rice, non-perishable food, and biblical pamphlets. In the weeks to come, the ministry also plans to deliver mattresses, wood for reconstructing houses, and roof tiles to missionaries’ families and other victims.”

One of the ministry leaders in Cuba sent this request: “We ask for your prayers for our missionaries and people affected by this terrible disaster and that God will use this event so that we can reach many with the hope of salvation in Christ Jesus. Readers and listeners can support these vital relief efforts by making financial contributions to Christian Aid Mission.”