Myanmar (MNN) – For decades, Myanmar’s Rohingya Muslim minority population has been known as one of the world’s most persecuted minorities. But over the past three weeks, their situation has taken a deadly turn.

On August 25, Rohingya rebels attacked police posts throughout Rakhine State. Myanmar’s military tried to root out the rebels, but many Rohingya say soldiers shot those who fled indiscriminately. About 400,000 of Myanmar’s one million Rohingya have fled the state from what the UN has called a campaign of ethnic cleansing. Myanmar’s government has drawn widespread condemnation as military soldiers have killed hundreds of Rohingya, attacking them with rocket launchers and burning their villages.

Wesley Thura with Asian Access, an organization dedicated to training and equipping Christian leaders throughout Asia, says it’s difficult to know exactly what side to believe.

The Rohingya are a Muslim ethnic minority group that came from Bangladesh nearly 200 years ago when Myanmar was under British rule. They have been denied citizenship since 1982 and aren’t recognized as one of the country’s 135 official minority groups. They live in one of the poorest areas in the nation and lack basic necessities and opportunities.

“We collect some money, some donations, and we give that money to our A2 alumni who is in charge in this area,” Thura says “So he brings this money and buys some rice or essential needs, and then brings this food and provides for them.” 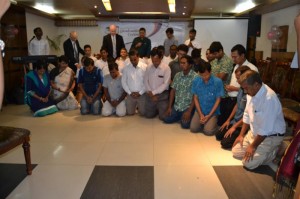 With so much contradictory information coming out of Myanmar, it’s difficult to know how to pray. Thura asks that you pray for Asian Access’ alumni working in this area and that Christians living in Myanmar would positively influence the situation.

“Now [Rohingya believers] are facing these kinds of new problems and difficulties,” Thura says. “So please pray for the Christian community here in Myanmar, that they may be able to talk with the government and find the best way to help both sides, both sides being the ethnic Rakhine people and Rohingya people.”