Haiti (MNN) — When Hurricane Irma was barreling towards the Caribbean as the Atlantic’s strongest Category 5 storm ever recorded, many feared the worst for Haiti — the poorest nation among in the Caribbean Islands.

Thankfully, Haiti did not take a direct hit from Irma, but as Josh Ayers with Food for the Hungry explains, “Because of the sheer size of Irma, she dropped quite a bit of rain…along [Haiti’s] northern coast there. There was some localized flooding, particularly along rivers and with storm surge along the coast. We did see quite a bit of flooding.”

Nearly 40 percent of the Haitian population faces moderate to severe food insecurity. And now according to Haiti’s agriculture ministry, around 18,000 farming families have lost all their food crops to Hurricane Irma.

Additionally, one of the biggest fears now is a resurgence of cholera in the nation. Ayers says, “You may recall after the 2010 earthquake that cholera was introduced to Haiti for the first time. So anytime you have large amounts of water flowing in a country that doesn’t enjoy the same level of infrastructure development that countries like the United States enjoys, you often see waterborne illnesses spike. So with the introduction of cholera in the last ten years there, that has become a key concern going forward in the future.”

Cholera is contracted when a person consumes human feces, typically through accidental water contamination. It leads to a severe form of diarrhea and can cause death if not treated. And Haiti is extremely vulnerable to cholera outbreaks in natural disasters.

“Our response effort at Food for the Hungry has been focused on those waterborne illnesses; particularly around hygiene promotion and hygiene kits, and so those kits consist of things like soap and basic hygiene materials. We dispatched a shipment from one of our partners in Georgia and those materials are on their way. They may have already arrived and we’ll be distributing those shortly.” 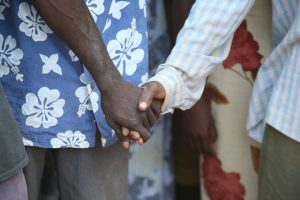 (Photo courtesy of Food for the Hungry via Facebook)

FH works through the local church whenever possible, enabling them to be the hands and feet of Christ to their own communities. “Because the local church [in Haiti] is under-resourced, as you might imagine, Food for the Hungry can provide much-needed goods and finances to empower that local church to reach out to its neighbors.”

As FH strives to stem an outbreak of waterborne diseases in Haiti following Irma, they’re asking for the Body of Christ to come alongside them in a few ways.

First, Ayers says, “Your prayers would be welcomed for the local church as well as the local organizations who are responding, Food for the Hungry being one of those. We’ve been working in Haiti for decades. Most of our staff are local Haitians and so sometimes they’re families are impacted by these things. You can pray for our staff.”

And finally, you can be a tangible support through generous giving, and know that your gift is going to resource the Haitian Church acting as the hands and feet of Christ to their neighbors in disaster recovery.

Click here to donate to Food for the Hungry’s Emergency Disaster Relief fund!