Food for the Hungry assists Rohingya refugees in Bangladesh

Bangladesh (MNN) – As Myanmar’s Rohingya refugees continue to pour into Bangladesh, their problems are quickly multiplying. 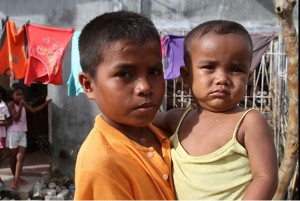 About 430,000 Muslim Rohingya refugees have fled ethnic violence in Buddhist-majority Myanmar since Rohingya insurgents attacked police posts throughout Myanmar’s Rakhine State on August 25. Many of the refugees who settled in Bangladesh lack food, water, shelter, and basic sanitation.

“Some of the immediate needs that we’re seeing, as you might imagine, with refugees fleeing their home country with what they can carry on their back is shelter. It’s food,” says Josh Ayers with Food for the Hungry. The organization has been working in Bangladesh since the 1970s. “Bangladesh and Myanmar are largely agrarian societies, and so a lot of folks grow what they eat.

“And so when you’re talking about refugees fleeing Myanmar into Bangladesh, they, of course, haven’t had the opportunity to grow anything to eat, and so what we call food security –the availability and the access to food– becomes quite an issue.”

Food for the Hungry is working with the Bangladeshi government and government-sanctioned partners to determine the best possible way to help save lives and bring hope. Ayers asks that you pray for his organization as it seeks the best way to provide assistance.

Ayers also says you can be praying for the spiritual facet of the conflict. It’s a tense situation that involves politics, religion, and race. Though it might be difficult for believers in the West to connect with the crisis, Ayers says it’s important we don’t forget the Rohingya during their time of struggle. 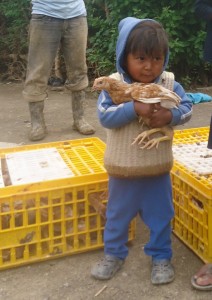 Learning how to care for chickens gives kids a possible job skill.
(Photo courtesy of Food for the Hungry)

“You can certainly pray for Food for the Hungry’s staff in Bangladesh, that they would be able to listen intently to what those needs are,” Ayers says, “but also that we would have hearts to hear and eyes to see what these people are going through, even from our living rooms in the United States…that we would maintain a heart for people that are suffering all over the world, particularly people that are suffering persecution.

“The early Church certainly knew what that was like, and I think there are people all over the world that are experiencing that. So we can pray for those people because Christ tells us that we will be persecuted.”

Interested in how you can support Food for the Hungry’s work? Click here for ways to give financially.