China (MNN) – In China, new restrictions on religious affairs could mean less freedom for Christians. The country recently passed an amendment that includes guidelines on the types of religious organizations that are permitted and the activities they can conduct. 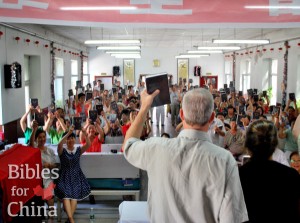 (Photo courtesy of Bibles For China)

Wendell Rovenstine with Bibles for China explains the shift he experienced on his most recent trip to the country: “We have to be very forthright and let [authorities] know exactly what is taking place. In fact, just coming out of China this particular time, in each of the locations we were at, the Religious Affairs Bureau was there just to visit with us, let us know what was transpiring and going [on].”

The laws are expected to take effect on February 1, 2018. According to World Watch Monitor, some believe their purpose is to curtail Islamic extremism, while others say they have already seen greater restrictions imposed specifically on youth work.

“The internal Chinese community has a mandate to keep and maintain harmony, so this is their effort to maintain harmony within their country,” Rovenstine says. “I never go over there feeling threatened or fearful or worry about somebody looking over my shoulder, going to be sent out or hauled off. As long as we maintain that relationship and openness with what we do, we feel like we have tremendous opportunity.”

Bibles for China has made great efforts to maintain this openness. Rovenstine says they only distribute Bibles and other materials produced inside China– unless otherwise approved by the government– and recently met with church officials to gain a better understanding of the restrictions.

“Bibles for China has constantly maintained that we’re going to respect the government,” Rovenstine says. “We felt that it was important that when we went over there this time that I took two individuals with me that are younger than myself to meet with the national Chinese Christian churches in Chunghai. We had a great meeting with them. A lot of questions were asked regarding their ministry and what we’re doing, what our approach is, what our passion, what our mandate is. 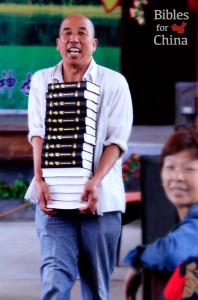 (Photo courtesy of Bibles For China)

While the new regulations present an ambiguous future for China’s believers, Rovenstine says one thing is certain: God’s Word is changing lives.

With religious freedom at stake in China, your prayers are becoming increasingly important. Pray for a growing passion for God’s Word and that its message would take root in people’s hearts. You find other ways to get involved with Bibles for China by clicking here.