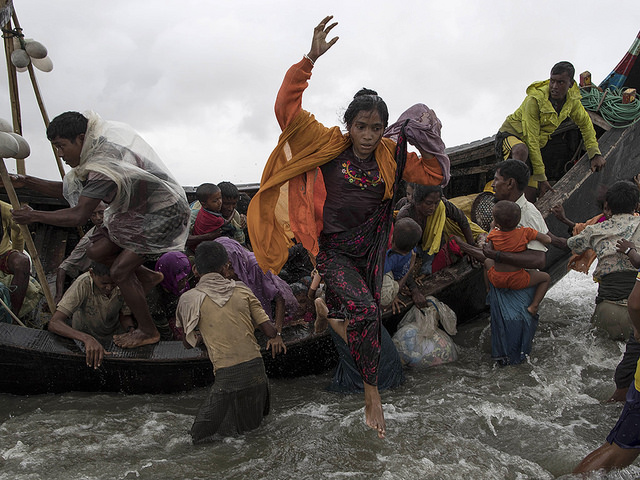 The United Nations General Assembly committee demanded last week that Myanmar end the military campaign targeting Rohingya which has “led to the systematic violation and abuse of human rights”.

Shep Owen with Food for the Hungry says, “The people are still arriving every day and the current number of refugees is estimated at around 800,000. When this began a couple of months ago, the population was in the high 300,000s…. Fifty-two percent of the refugees are children, which is an interesting and alarming statistic.” 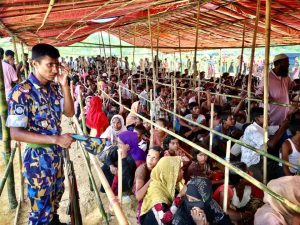 A Rohingya refugee camp in Bangladesh. (Photo courtesy of FMI)

According to CNN, the estimated number of Rohingya refugees is estimated to grow past one million in the coming weeks. And those arriving every day in Bangladesh are in desperate need.

On Monday, China’s Foreign Minister Wang Yi proposed that Myanmar enact a ceasefire to end the ethnic cleansing, begin repatriation of Rohingya refugees, and work towards a long-term poverty alleviation solution. Aung San Suu Kyi, Myanmar’s de facto leader, said Rohingya who can prove they were residents in Myanmar would be allowed to return.

But with their homes destroyed and their communities scattered, what is there to go back to? And is it safe or even advisable?

Currently, Myanmar plans to resettle most returning refugees in new “model villages”. The UN has criticized this move, saying it would just be creating permanent camps to contain the Rohingya within Myanmar.

Of the Rohingya, Owen says, “They are a group of Muslim people who live in a primarily Buddhist area that borders Myanmar and Bangladesh, and it’s an area that has been a bit disputed in terms of which country they belong to.”

Myanmar is a Buddhist-majority nation, and the Muslim Rohingya minority has suffered severe oppression for generations. The government has denied them citizenship and refused to recognize them as an ethnic group.

Food for the Hungry has been working in Bangladesh since 1971. They primarily serve communities with long-term development programs to enact sustainable solutions to poverty.

“We’ve been monitoring the [Rohingya refugee] problem for some years actually. This has been brewing and it’s really hit a peak this last year. So we decided we can no longer simply just watch the situation and realized the government and the actors that were responding needed help. We went in quickly to do an assessment with some partners, including the teams that are with one of our partners on the ground right now.”

As FH works with government and humanitarian agencies to provide aid for Rohingya, Owen says they could really use the support and prayers of the Body of Christ.

“[Be in] prayer primarily for obviously the refugees, but also for the political situation in Myanmar and also between Myanmar and Bangladesh…. Pray for our teams as we work there, that they’ll be safe and that the government of Bangladesh will continue to be a helpful partner in allowing us to help there.”