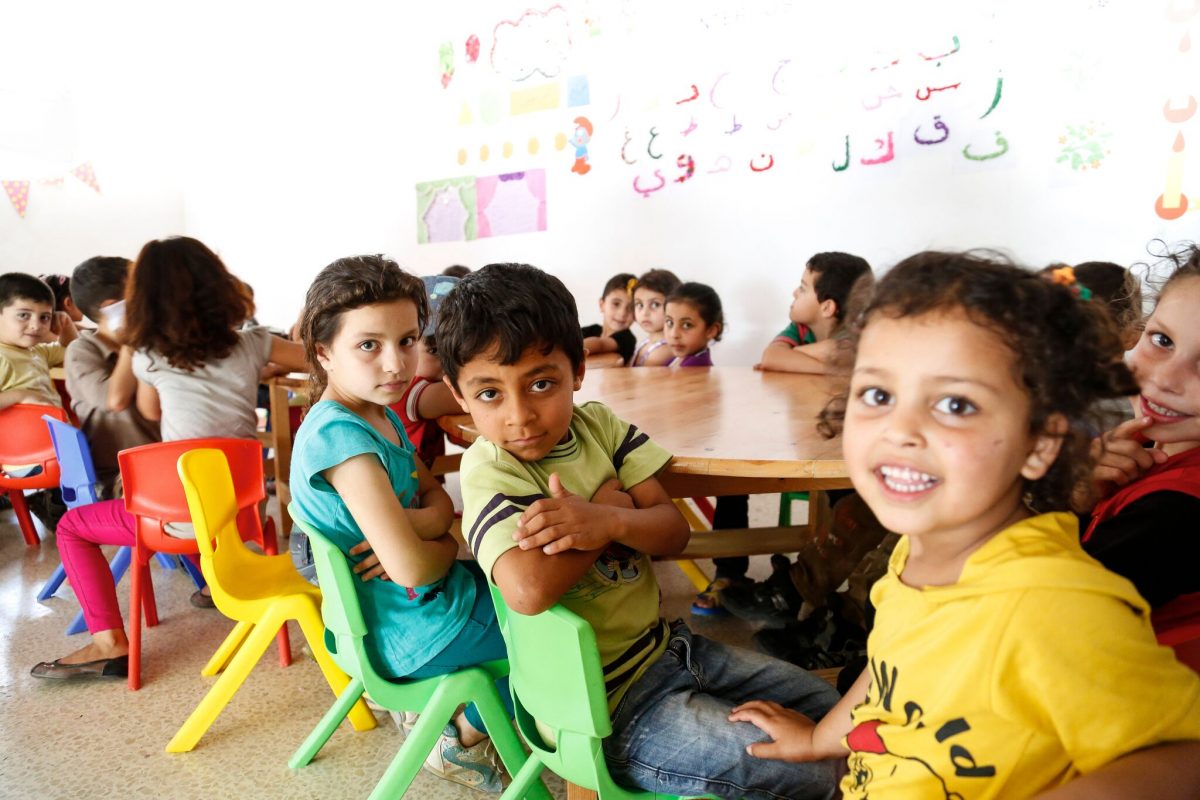 Cyprus (MNN) –This week marks a big milestone for SAT-7, a Christian satellite television ministry to the Middle East and North Africa. On Sunday, December 10, the ministry marked the ten-year anniversary of its channel, SAT-7 KIDS.

“Of course, it’s in Arabic, and it broadcasts throughout the Arab world. [It] aims at children pretty much 12-years of age and younger. Though, we know all the way up to the grandpas my age watch it, too.” 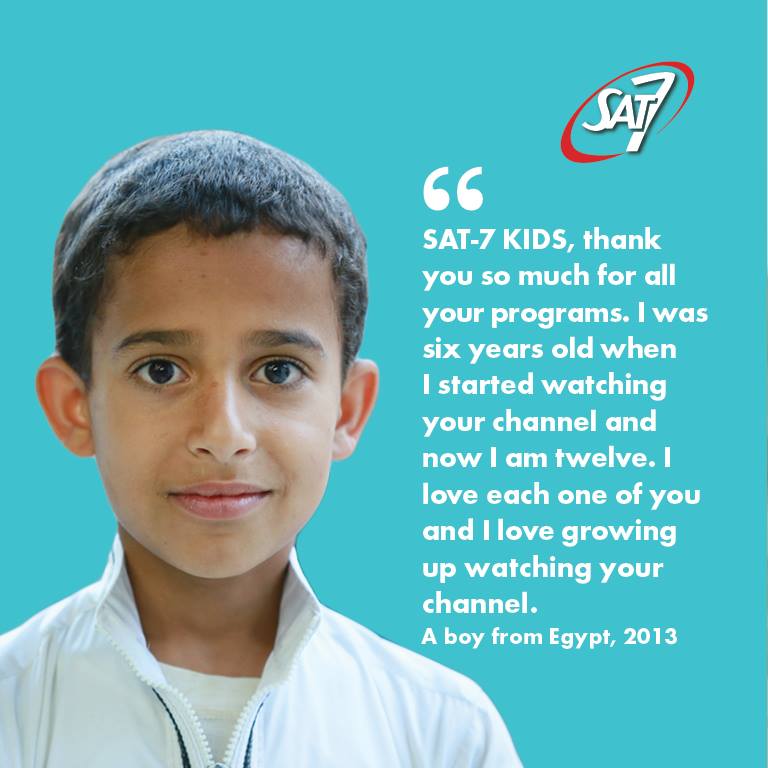 To celebrate, SAT-7 KIDS is noting the channel’s birthday on air as well as doing some fun and colorful programming for the kids. Rogers shares the staff also celebrated last week, with an anniversary cake.

After a decade of programming, SAT-7 Kids has been a part of many kids’ lives, influencing them for Christ as they matured.

And while many people in the Arab World aren’t willing to admit they’re watching a Christian channel, SAT-7 has received a lot of phone calls, letters, emails, and social media messages on a regular basis from kids and their parents who watch SAT-7 KIDS.

“[They] love the positive programming. They love the upbeat nature of the programming, the colorfulness, the optimism,” Rogers shares. “[It’s] a real contrast to what many of them see in their own countries and cities. And a contrast to sometimes what their religious worldview offers them.”

A Decade of Impact

Now, some of SAT-7 KIDS’ viewers are their 20s and many have reached out to tell the ministry its impact on their lives.

“We have heard from young people who’ve grown up…And they’ve said, ‘I grew up watching SAT-7,’ they’ve come to Christ [through it],” Rogers shares.

“[Some] are working in Christian television. I know one guy … in Morocco, great story of how he came to the Lord, it’s too long to tell here, but he’s now a Christian kids television program producer. And he often sends his work to SAT-7 KIDS and it ends up on the air.” 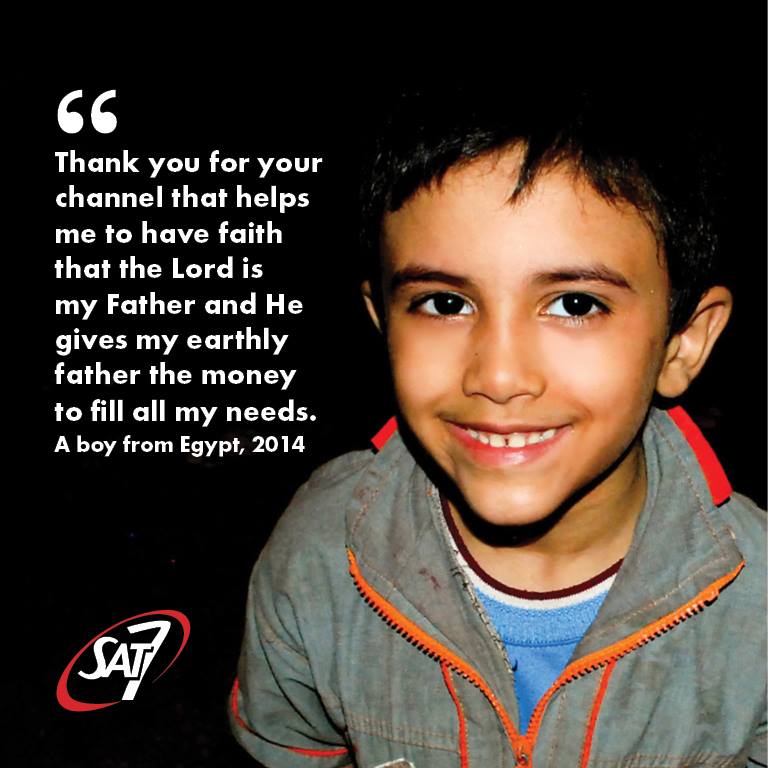 SAT-7 KIDS is also concerned about the children they’re ministering to and their needs. Many refugee kids in the Arab World are growing up without an education.

These kids aren’t being taught how to read, write, or even basic math skills. This deficiency is grooming these children to become more vulnerable to extremist recruitments in the future. To counter this and help these kids have a chance at being a productive part of society, SAT-7 KIDS is now airing a program called “My School.”

To counter this and help these kids have a chance at being a productive part of society, SAT-7 KIDS is now airing a program called “My School.”

“We’re teaching Arabic and English and mathematics, to begin with,” Rogers explains. “We’re going to add science. Again, [it’s] aimed at younger children. Just something supplemental and basic to help them.”

SAT-7 continues to be a part of kids’ lives with even non-Christian parental approval.

“[Parents] say over and over the same phrase, ‘I feel so good about my children being safe, watching this program or watching this channel,’” Rogers shares.

“Because again outside, depending on what country they’re in, there’s literally violence or conflict or some kind of pressure, oppression…And watching other Arab television channels, they’re seeing, again, violence portrayed and sometimes [on] the children’s programs, believe it or not, they’re asking these kids to blow themselves up in the name of their god.” 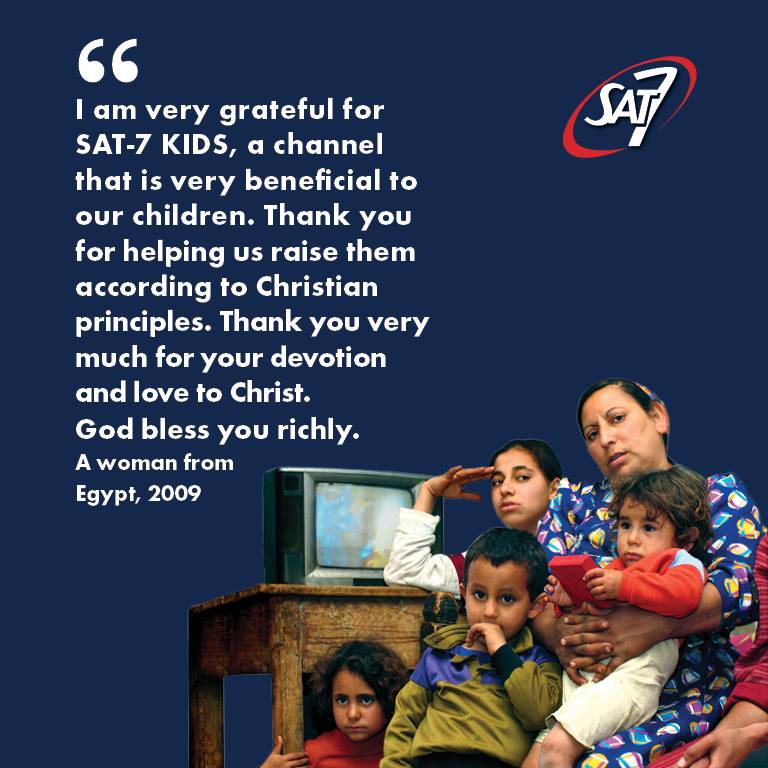 SAT-7 KIDS is a bright option in contrast to some channels kids could be watching. And, it helps teach children to celebrate life, identity, and a healthy sense of tolerance.

And for many, this type of programming is a culture shock, but in a positive way.

“It’s a bigger population than the United States, a very important area, and if we want to change the future of the Middle East we need to learn more about them. Learn where we can cooperate, learn where we can get along literally and respect each other, even if we’re different,” Rogers explains.

Here are three main ways to get involved

Be Informed: Learn about what’s happening in the Arab World including the religious thinking, theologies, and cultures there. One of the easiest ways to learn about the Arab World is through SAT-7. The ministry does have videos in English and even has an app so you can watch them wherever you’re at.

Be Prayerful: Pray for the kids and families watching SAT-7 KIDS and other SAT-7 channels. These people include refugees who are often times struggling to find shelter, food, and jobs. And as they try to move forward in life, some are having babies who, because of the refugee stature of their parents, are born without birth certificates and other important documents. So please, pray for their providence, for aid, for them to be able to start rebuilding their lives, and for Christ to enter their lives and transform them.

Also pray for SAT-7’s impact, through all five of its channels, in the Arab World. Pray for lives to be transformed by the Gospel and for peace to come to the region.

Be Generous: Another way to help is by giving to SAT-7. All it takes is $1 to provide programming for a year for one person in the Middle East. Imagine how many lives could be impacted if you gave a one-time donation, or even ventured to commit to a monthly gift. Either way, it’s used to share the Gospel with people who might not be able to hear it through any other medium than their television screens. So please, will you consider giving?