Jerusalem controversy and the impact on Christians

Israel (MNN) – President Trump’s statement on Jerusalem last week led to an eruption of protests from Gaza to Indonesia with harsh criticism coming from Turkey and many European nations. Today, most of those protests have calmed down.

David Curry, CEO of Open Doors USA explains, “Recently President Trump has announced that the US government is going to recognize Jerusalem as the capital of Israel and that the American Embassy, over time, is going to be placed there in Jerusalem.

“Now this is very volatile and controversial issue in many parts of the world, particularly in the Middle East.”

This announcement comes after nearly two decades of different administrations signing waivers to put off the move of the US Embassy from Tel Aviv in accordance with the Jerusalem Embassy Act.

The international response was mostly critical– major EU players believe such a decision will constrain peace talks between the Palestinians and Israel. The two groups have been fighting over east Jerusalem, a significant religious site for both Muslims and Jews.

It’s not surprising to find, at the juncture of politics and religious beliefs, a particularly violent debate, especially when it’s centered on one of the most notorious land disputes of our time. Throw in thousands of years of history and prophecy and a foreign power already dealing with major political polarization of its own, and you’ve got a situation on your hands ready to explode.

While Open Doors does not get caught up in political disputes, Curry does offer some reminders to the Church.

First of all, he asks us to remember that decisions like this can often negatively impact Christian communities around the world. This is because many societies view Christianity as a western religion. And when a western nation makes a move they find distasteful, they may take it out on their Christian neighbors. It’s important to know this dynamic so that we remember to be praying for our brothers and sisters in Christ.

“From Open Doors’ perspective, what we look at in the Middle East is where are Christians persecuted within that region? What are the issues, what are the tension points? How can we support persecuted Christians, to first survive, in many parts of the Middle East, and then thrive, hopefully, eventually, over time?

“And so, obviously, this is a thing that we’re going to be looking at over time as to whether or not it plays a part in increasing persecution of Christians in the Middle East, whether it draws attention to these issues in a different way,” he explains. 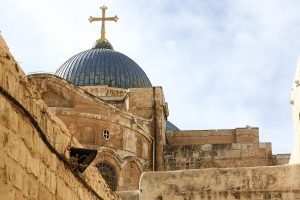 This particular situation is further muddied because it’s hard to draw a line between political and religious motivations in the United States-Israeli relationship. Many Christians in the United States support the alliance with Israel based on biblical prophecy while others support Israel in the Palestinian conflict based on historical facts.

But wherever you stand on that issue, Curry encourages us to align ourselves with Jesus and make sure our faith doesn’t get confused with our political stance, even if it does influence it. If the Body of Christ in the west is consistent in this, it might help dispel the idea that Christ is tied to a culture or a region of the world.

“I want people to see Christianity as a movement of the teachings and following of Jesus. It’s a spiritual thing, in our mind. So we can’t, sometimes, understand why people would see a political calculation by an administration, any administration, as somehow having a direct effect on Christians.”

Finally, he urges us to keep in mind that there are Christians among the largely Jewish and Muslim populations in this part of the world. The tension between these two nations puts incredible pressure on them, too.

Here’s how you can pray, “Pray for these people, try to be an outspoken person for Jesus and not, maybe necessarily, always tie it to the political agenda.”