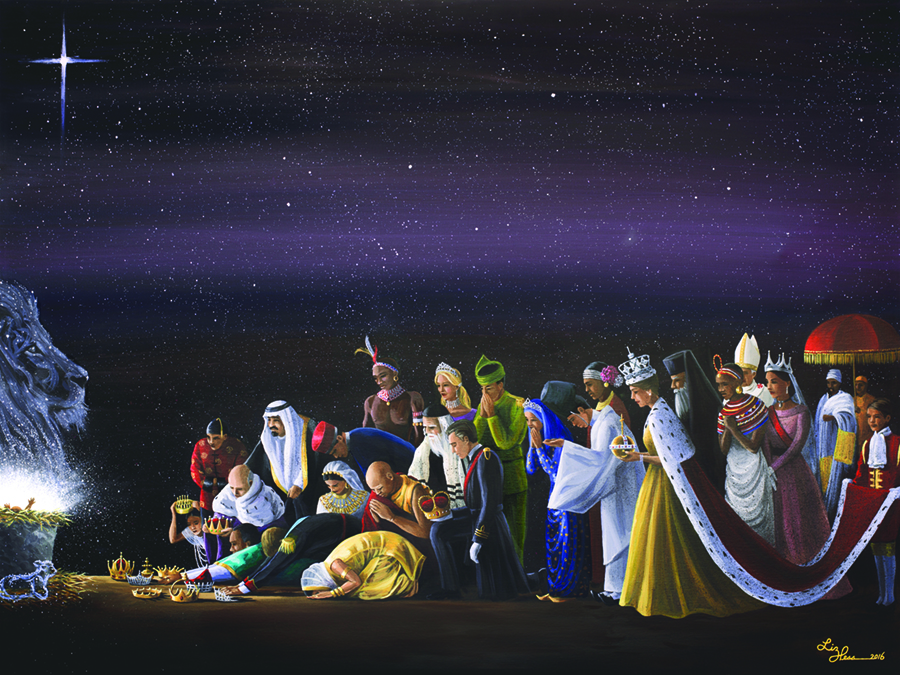 International (MNN) – How can you take what God has gifted you with and use it to advance the spread of the Gospel? Sometimes, it may seem obvious if you are gifted in evangelism or preaching or service. But what if you are a musician or a wordsmith; a dancer or an artist?

Global Disciples is passionate about missions, and their central focus “is to equip leaders selected by their churches to multiply Christ-like disciples, who multiply churches among least-reached people.” But they also want to encourage their partners and supporters to get involved in the Great Commission with whatever the Lord has placed in their hands.

Last year, Global Disciples asked Liz Hess, a local artist in Lancaster, Pennsylvania, to paint an image they could send out on their Christmas cards.

Wendy Nagle with Global Disciples says, “We often talk to our partners about how they can connect with the ministry that would be unique. Many of our partners are businesspeople and have a particular business that they’re working with. In Liz’s case, she’s an artist!”

But what started as a simple art commission went viral and thousands of people were moved by the Gospel message.

The Global Disciples team walked into Hess’s art gallery last year and asked if she could help them as they prepared to put together their Christmas card. They suggested she could create an image for their ministry to send out on their Christmas card as a way of saying thank you to their partners.

Hess was excited about the project. As they discussed ideas for the image, Global Disciples knew they wanted international characters in the image since they are an international ministry. Together they came up with the idea of a Creche or Nativity scene.

Hess says, “But as they were walking out my gallery door, one of them turned around and said, ‘But we want you to be creative and to be led as the Spirit would lead you. So you have freedom to change this if you want.’

“Well, when I sat down to then think about how I was going to lay this out and create this, I prayed a lot about it of course. And immediately images started to come into my head. The typical Creche or Nativity scene disappeared. What I was left with was just the manger and then above the manger in kind of a celestial, ethereal concept was a lion and then under the manger in the same way in stars, kind of celestial, was a lamb. And then I saw kings and queens and religious leaders from around the world – all different international figures – laying down their crowns before the manger and bowing before the manger.” 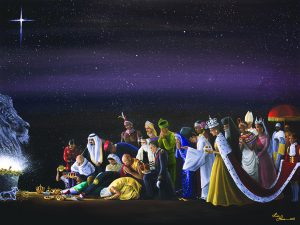 Hess was excited about this renewed concept and ran it by Global Disciples. They loved it and encouraged her to go with it.

This painting was called ‘King of Kings’. The response Global Disciples heard from their partners were resoundingly positive. But as more ministries and people experienced the painting, it quickly spread. Soon Hess was getting requests to purchase prints of the image from all over the world.

Nagle says, “As they experience the paintings for the first time, just really taking it in,…to see the interactions and the changes of hearts and the impact as people are experiencing them is wonderful.”

‘The King Has Come’

Going into 2017, Global Disciples’ founder Galen Burkholder returned to Hess’ gallery in the spring and asked if she would be willing to create another image for this year’s Christmas card. Without skipping a beat, she said yes.

But, according to Hess, “I said, ‘Galen, I will be glad to do this for you. But I need to know the Holy Spirit is giving it to me. What I don’t want to do is start to create typical Christian pictures which are pretty. I want it to be impactful and meaningful.’ So I said, ‘I will do it for you on the condition only that the Holy Spirit gives it to me again.’”

They agreed. Then later this year, Hess received an invitation from a ministry called The Jerusalem House of Prayer for All Nations to come visit them in Israel. They had seen Hess’ King of Kings painting from last year and loved it.

Hess was looking forward to the Israel trip and Global Disciples even asked if she would paint the image for this year’s Christmas card while she was there. Again, she said yes – if the Holy Spirit gave her something to paint. She had not yet been inspired with anything from the Lord.

As she sat on the plane in New York City before taking off on her journey, Hess spoke with a friend on the phone who wanted to pray for her.

“She’s praying for me and she interrupted the prayer and said, ‘The Lord is saying that he is going to give you an image. He is going to download an image for you to paint while you’re in Israel.’ And I said, ‘Did you know I was going to Israel specifically with the idea in mind that I wanted to create an image for Global Disciples?’ Well, no! She had no idea. I had not shared that with her.”

From that interaction, Hess shares, “I had two thoughts. First of all, I thought this is interesting that she’s using the word download. She’s an older woman and I thought it’s kind of a millennial term. I’m not sure it’s part of her vernacular. Then also, why would God use the word download? It just seemed unusual to me. But I pondered in my heart, I thanked her for the prayer and for the word and just took it with me to Israel.”

While in Israel, she felt inspired by various ideas of things she wanted to paint for her gallery. But nothing came to her that would specifically be for the painting with Global Disciples.

Finally, the trip was close to its end. They were four days away from departure and had just arrived in Jerusalem to stay at the Jerusalem House of Prayer for All Nations.

Then, Hess shares, “Two women came up to me from the ministry and said – and again, I didn’t know [these women]. I had met the one woman before, I had never met the other – and they both said, ‘The Lord is telling us that we are to anoint your hands with oil because the Holy Spirit wants to give you images that he’s going to download for you to paint.’

“I thought this is so fascinating! Two continents, two different parties give me the same exact word and use the word download.”

Hess says what happened next was completely the movement of the Holy Spirit.

“That night, I received such a clear image. It literally came crashing into my mind. It made me stop everything. I had to write down what I was seeing. I wasn’t having a vision per se. But it was such a clear mental image that came out of nowhere. I wasn’t thinking about it. It was very random. But the word crashing is what I use because it literally just crashed through my mind. There was this image with all these details. So I started writing everything down. 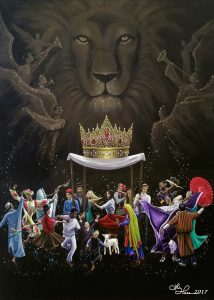 “In the middle of the night at three in the morning, I woke up with a start. There were more details coming in, and then the next day. So it happened three times within 15 hours, this image was downloaded. So I can’t even say I created this. It was really created in the Heavenly realms and God literally downloaded it to me.”

The image Hess was given depicts a Jewish huppah held up by four Jewish characters and there are international characters dancing around it. Under the huppah is a lamb, and above is a lion. She named this image ‘The King Has Come’.

“When I think of the word download now, I thought, ‘Why would God use that word?’” Hess ponders. “Download means that there is an image already created and we’re just transferring it from the internet or from a file to our device. And that’s exactly what God did. He transferred an image from Heaven to my device, which was my brain. So all that I can say is I’m the paintbrush of this particular painting. I’m certainly not the creator of it.”

Nagle says every year, the paintings prompt spiritual reflection and worship, which is really the beauty of Christian art in ministry. “We all talk about ‘what’s in your hands’. In Liz’s case, it’s a paintbrush. It’s a beautiful paintbrush that God is using for Kingdom purposes in very special and extraordinary ways. That’s the perfect kind of partnership.”

“We’re not a sending organization. Much of our time is spent interacting with our global partners. So to have people in the local community begin to understand who we are and what we’re about has just been a tremendous blessing for us.”

Nagle shares, “The other day, our team sat down and together signed 1,200 Christmas cards that we’re sending out and kind of wishing we could be there as each one is opened because we know the impact of that painting is now traveling all across the country and literally around the world. And it’s a blessing!” 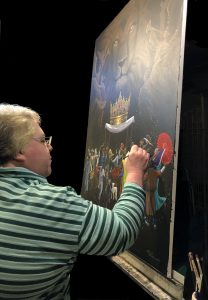 Hess hopes that she can be an encouragement to Christians everywhere who want to use their gifts for God.

“I think the arts – whether it be music, writing, dance, painting, anything involved in the arts – I think are closest to the heart of God because they are the creative giftings and he is the great Creator…. I think that is why that particular gifting is so under attack. There is so much dark art out there and music and writing and I think that’s why that whole realm is so attacked. And those of us Christians who are musicians or writers or artists or dancers or whatever we are, to be that vehicle, that platform for communication is so impactful.