Iraq (MNN) — Some cities in Iraq such as Qaraqosh have been historically Christian for centuries. There are even Christian families with lineages that stretch back nearly to the time of the apostles.

But after hundreds of years, people in Iraq’s historically Christian communities were primarily Christian because, well, they weren’t Muslim. This led to a lot of rote religion that didn’t always include a true relationship with God.

That all changed when ISIS entered the picture.

Steve Van Valkenburg with Christian Aid Mission says, “When ISIS came in and persecuted them and chased them out, many of these Christians went to places like Erbil and Dohuk and Kurdistan. In those locations, there is a ministry assisted by Christian Aid Mission that was able to reach out and feed and clothe and share the Gospel and give out Bibles and disciple new believers. 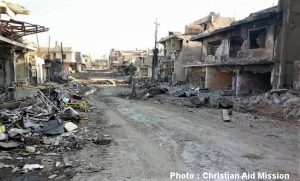 One of the towns outside Mosul destroyed by Islamic State terrorists. (Caption, photo courtesy of Christian Aid Mission)

Then in October 2016, they got the news: Iraqi forces had retaken Qaraqosh from ISIS. Since then, some residents have returned to Qaraqosh. But many have not since there isn’t much to go back to. Homes, businesses, and churches were demolished. The infrastructure for sewage, power, and water was destroyed.

For those who have returned to Qaraqosh, however, they are hopeful. In December 2016, a Catholic church celebrated Christmas for the first time since ISIS’ takeover. But still, no evangelical Christians had gathered in their newly-liberated city.

Nasim was a nominal Christian who fled Qaraqosh before ISIS came in. While living displaced in Erbil, a ministry leader led Nasim to a true relationship with Christ and discipled him. When Nasim went back to Qaraqosh, he began building a two-story house. On December 7th, Nasim led a small group of Christians in worship for the first evangelical church meeting in Qaraqosh.

Now, in the midst of the Christmas season — which goes until January 6th in Iraq — these evangelical Christians are celebrating Christmas for the first time in liberated Qaraqosh.

“For them this year, Christmas in their hometowns is a very different kind of feeling, because to them now they know the one who was born on Christmas day 2,000 years ago and now they have a relationship with him and they have a new identity as Christians.”

Van Valkenburg asks believers around the world to celebrate and pray with our Iraqi Christian brothers and sisters as they finish their Christmas festivities.

Right now, some of their biggest needs are supplies to rebuild homes and earn a living. Iraqi Christians also need more audio Bibles as an oral culture so they can continue to grow in their faith and witness to their neighbors.

You can be a tangible encouragement by giving to Christian Aid Mission. Click here to help meet the physical and spiritual needs of displaced people in Iraq.