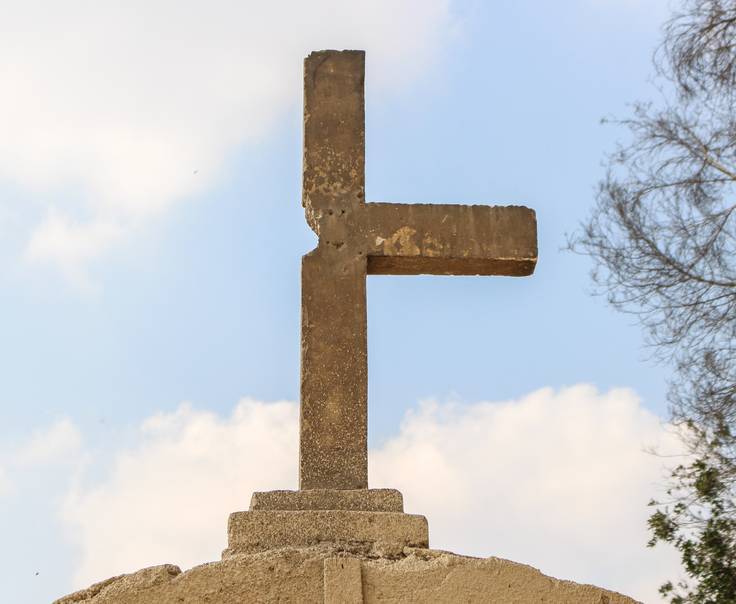 Egypt (MNN) — We have known that Christian persecution in Egypt is getting worse. But Open Doors’ 2018 World Watch List confirmed this when it was released last week.

The World Watch List reveals the top 50 countries with the worst Christian persecution, and Egypt ranked 17th this year — up from its position as 21st in 2017. 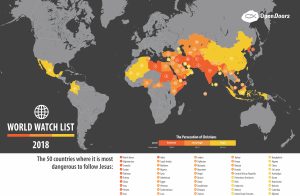 The 2018 World Watch List naming the top 50 countries where it is most dangerous to be a Christian. (Image and header photo courtesy of Open Doors)

Egypt is home to approximately half of all believers in the Middle East. Over the last year, 128 Coptic Christians were killed for their faith and 200 were forced to flee their homes. What they’re experiencing in Egypt are ‘unprecedented levels of persecution and suppression’ according to Open Doors.

This uptick in attacks and murders led a Cairo priest to call it “the most aggressive campaign against them in the history of modern Egypt”. The Islamic State has even announced they intend to “wipe out” Egypt’s Copts and “liberate Cairo”.

We spoke with *Sarah, an Egyptian ministry correspondent. She says, as a Christian who grew up in Egypt, the recent uptick in attacks is evident to her. “The attacks increased and the last attack, if you were following, was the Helwan attack. They attacked a church in Helwan in greater Cairo just before our Christmas, just by the end of 2017. That was another church and another hurt in our hearts.”

The issue of persecution is especially pronounced for women in Egypt. Their lack of a hijab makes Coptic Christian women stand out even more than their male counterparts.

“Do you know that most of the women [in Egypt] have their hair covered? But Christians do not. So if I am walking the streets, it’s very well known [that I am a Christian]. So I myself, I can’t move without using my car. I’m using my car everywhere. I just go down from where I live, I take my car to where I want to go, and just come back to stay at home. That is the way we live.”

Sarah shares, “I had several bad situations because I’m a Christian, because my hair is not covered. One time, I was driving my car and someone was driving a big car and he just came on the wrong side just to hit me. He came down and kept shouting at me. I couldn’t do anything and it was Ramadan time. That is the worst month in the year. The people, they become crazy because they feel that your hair is not covered so you are a Christian so they have to deal with you in a bad way.

“One other time, someone just spit at my face on the street. For me, it’s really very painful and I feel like I do not want to stay here anymore. But I’m just waiting for the Lord to do something.” 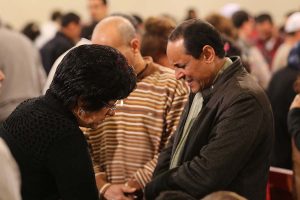 Although Coptic Christians are suffering more vitriol and danger, Sarah says they are not strangers to oppression.

“Persecution for Christians in Egypt, that’s nothing new with it. It’s old and it’s been a long time. This is how the Church grew up and how I grew up knowing that we are persecuted. And we’re not only persecuted, but people deal with us as if we are a second-class of people, as if we are not Egyptian, even though we are Egyptian.”

Egypt’s President Abdel Fattah el-Sisi has shown support for the country’s religious minorities and condemned terrorist groups. But radical Muslims view the president as favoring Christians and other minorities over Islam.

“Our president is trying to build a new culture that we are all Egyptian. But he can’t change it all of a sudden…. So that makes the fanatic Muslims become more aggressive against us,” Sarah explains.

“We are trying to ask the government, our security people to take care of the churches. To be honest, they are trying to do their best. But sometimes they got attacked as well. I remember that last year they were trying to attack the Pope and two of the security policemen were killed in front of the church during the Palm Sunday celebration. That was last year.” 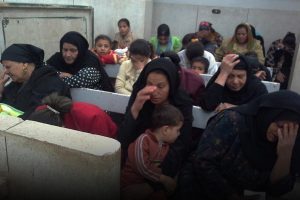 “Honestly, it is very painful. It breaks our hearts and we’ve learned just to pray and just leave it to the Lord and lift it to the Lord. This is what we learn as a Church, that we are praying for [our attackers]. We would like them to come and know Jesus Christ. We have nothing against them.”

Our Christian brothers and sisters in Egypt need to know the whole Body of Christ is hurting with them. And praying with them.

“We need a lot of prayer. We need the global Body of Christ to pray for the churches, for the Lord to protect us and to guide us wisely how to deal with our security and with our government and with everything.”

If you’d like to give in support of outreaches encouraging the Body of Christ and witnessing to others in Egypt, there are several impactful ministries you can support.

Learn more about Christian Aid Mission and their ministry in Egypt.

Check out Voice of the Martyrs and read about their work with persecuted Christians in Egypt.

Go to Open Doors’ website and learn more about their outreach to Egyptian believers.